It’s springtime again. The evenings are longer, the days are warmer and the garden is in bloom. Also Mrs Penny Plover has hatched another batch of chicks – 4 little chicks have hatched.

Blame Joy!  She asked me if I could make a glass chicken!

Joy is one of the members at the Lower Clarence Arts and Crafts Association’s Ferry Park Gallery.  Joy made me a wonderful crocheted woolen knee rug that has kept me warm all winter.  Joy loved the glass fish that I have at Ferry Park, and asked if I could make a glass chicken for her granddaughter’s birthday.  That was fun! 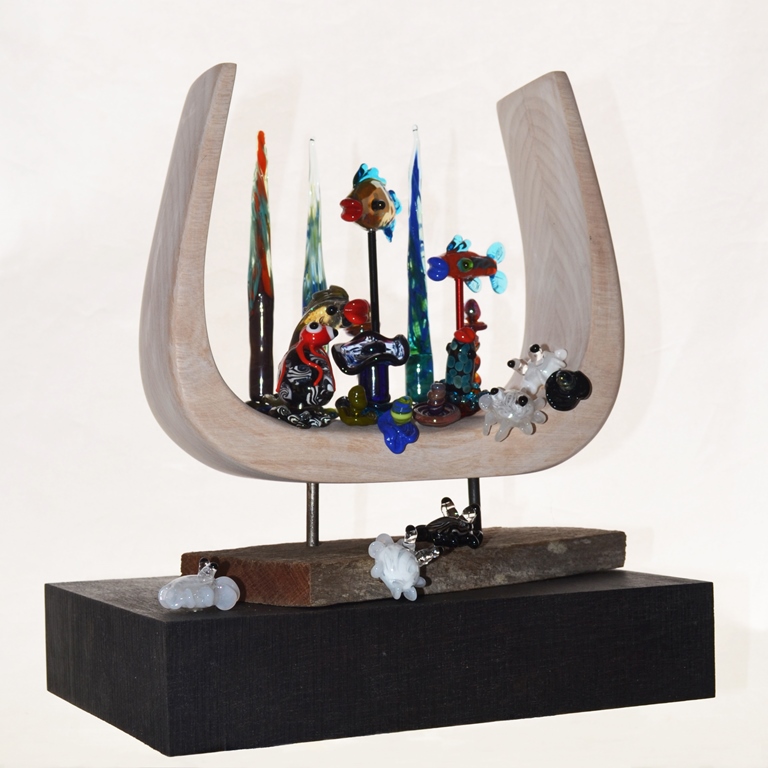 Fantasy in a fishbowl #3

This fishy piece was awarded a ‘Highly Commended’ at the recent LCACA small works 8×8 exhibition.  The piece features a bunch of fantastic fishy critters more or less in a dreamy fishbowl – however a few of the critters are making a break for it!

The exhibition has since ended, and this piece has been updated and remounted onto a solid timber base.  This piece is now at Ferry Park Gallery – if you are travelling up the Pacific Highway and passing through Maclean, pull off the highway and take a break while you check out the Ferry Park Gallery. 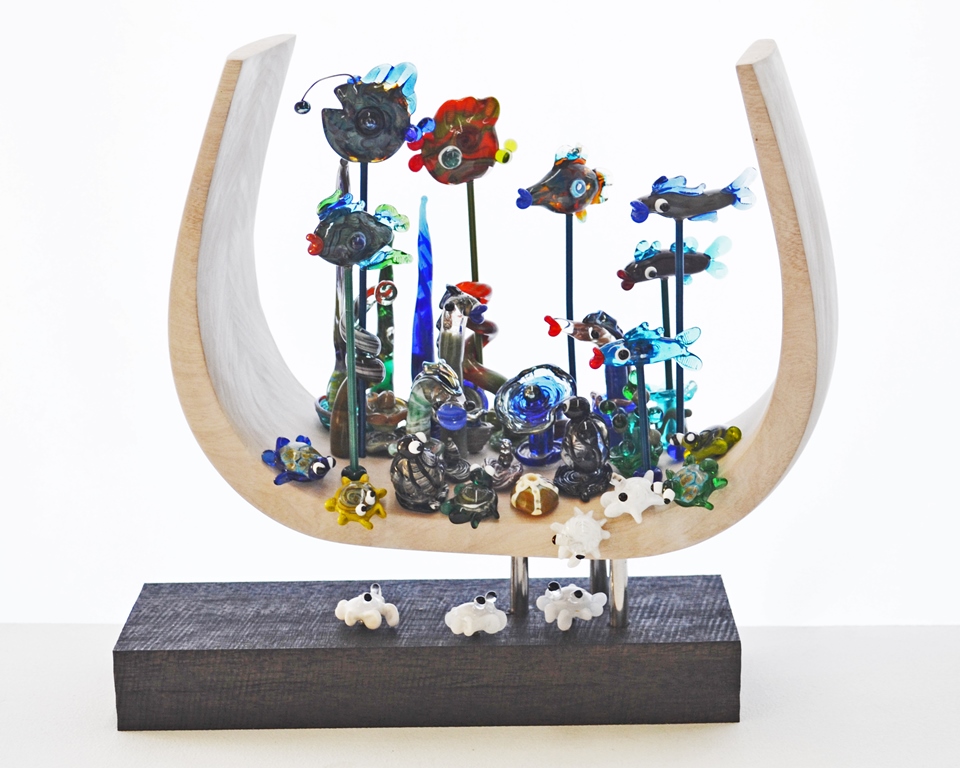 Fantasy in a Fishbowl

Yesterday afternoon, the ‘Clarence River Women in Art Exhibition kicked off at the Yamba Museum.  The exhibition features 60 artists who live and work in the Clarence River valley.  The show is the result of a lot of hard work and organisation by Debra Novak, aided and abetted by Bob and Marea Buist.  The exhibition runs from 12-December, and runs until 28 January 2018.

I am proud that my ‘Fantasy in a Fishbowl’ is part of this exhibition.  The piece is collection of quirky marine critters, mostly contained within a ghostly fishbowl – there are a few escapees…

One of the features of the exhibition will be artwork by  earlier women artists from the Clarence Valley, some from the 19th century.  These artists recorded people and places that are now historical. The show also features a painting  by Lillian Chauvel, the first Australian female artist to exhibit overseas.  Incidentally, Lillian Chauvel was the sister of  General Sir Henry Chauvel, who led the Desert Mounted Corps at the Battle for Beersheba, where the 4th Light Horse carried the famous charge.

The opening event included performances by two young Clarence Valley singers – the classically trained Michelle Jean Ryan and contemporary singer/songwriter Grace Hickey.  It turns out that Michelle’s great-aunt was Margaret Gard, born at Harwood, and better known as Margherita Grandi, a noted operatic mezzo-soprano and diva, who sang at Covent Garden, La Scala and other noted opera houses, who sang in movies such as ‘The Red Shoes’, and who was recorded in in work conducted by Sir Thomas Beecham.  That’s a long way from Harwood Island!

I am glass artist living and working in the Clarence Valley region of northern New South Wales . I use flame work techniques with various types soda glass sourced Europe and the US to make wearable art with an individual flair.

My work is influenced by the colours and forms of the Ningaloo Reef and the Australian North West coast where I lived for ten years.

I like to make my work vibrant, tactile, and wonderfully wearable.